According to the statistical data of China's leading car quality information platform for defective automobile product collection, there were 85 medium-sized cars that had at least one vehicle owner complaint in 2017, and the total number of complaints was 4,907, which was an increase of 5 models compared to 2016. The total number of complaints The volume increased by 65, an increase of 1.3% year-on-year. Among them, most of the top ten in the list are joint venture brand models. After removing the complainantâ€™s voluntary application for withdrawing the information, the 2017 domestic medium-sized vehicle complaints ranked as follows: 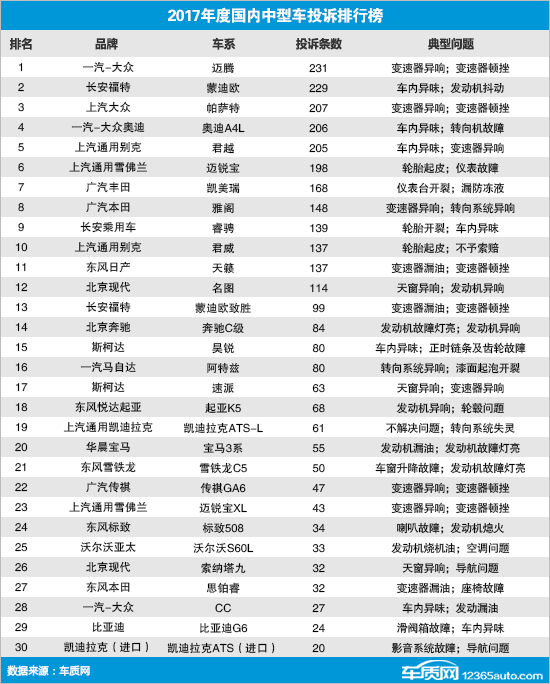 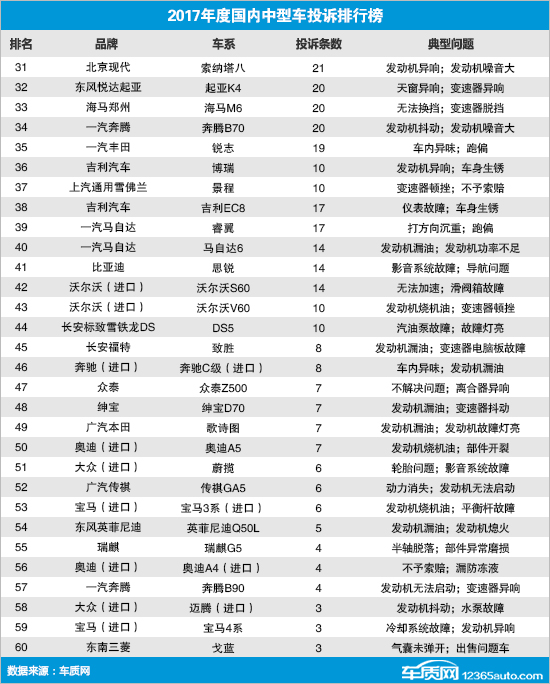 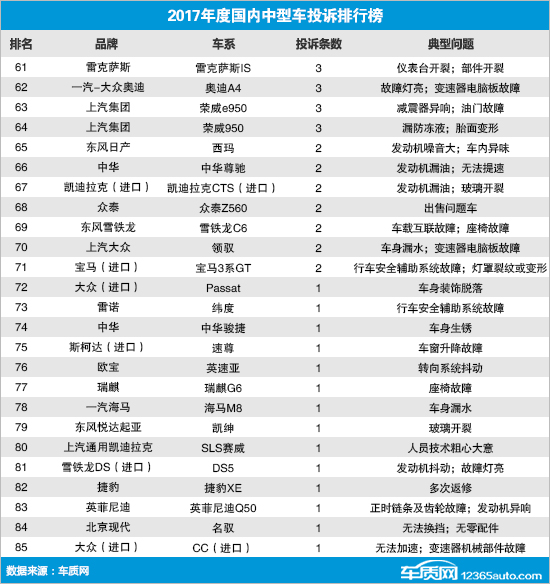 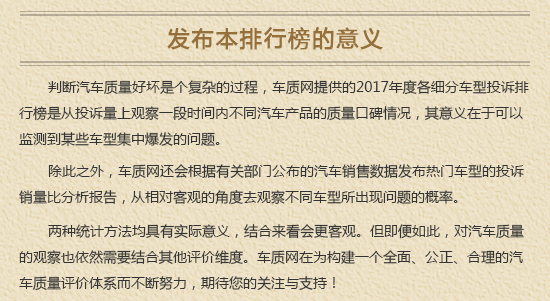 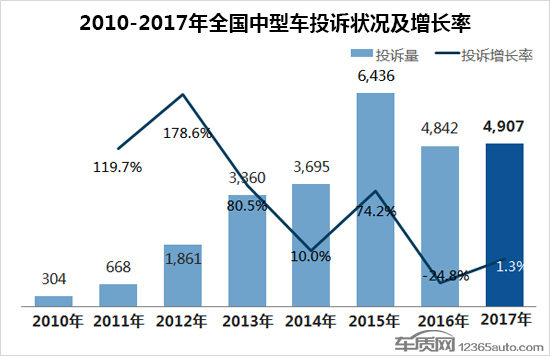 Specific to the 2017 list, the German and American models again took the lead in the volume of complaints, the top three are Volkswagen MAGOTAN, Ford Mondeo, Volkswagen Passat. Car quality network data shows that in the top 30 list of 2017, only 3 models of self-owned brands were included, which remained at the same level as in 2016. However, this does not mean that the quality of independent brands is better than that of joint venture brands. Due to the larger sales volume and retention of its own branded medium-sized vehicles and joint venture brands.

1, quality problems are still the focus of complaints for medium-sized cars

According to the car quality network data, in the mid-size car complaints in 2017, the quality issue is still the focus, accounting for 79%, which is a drop of 6 percentage points compared to 2016, and the amount of complaints has also been reduced by more than 200 pieces. To some extent, it reflects that the quality of domestic medium-sized cars has improved. The volume of complaints on service issues and comprehensive issues both increased, with the proportion also increasing to 7% and 14% respectively. It can be seen that among current domestic medium-sized vehicle complaints, service problems and comprehensive problems have shown a certain growth trend, while complaints about quality problems have improved.

Judging from the typical problems in the 2017 mid-size car complaints, problems such as car odors, tire skinning, engine/gear abnormalities, setbacks, and jitter are still typical complaints. Among them, complaints about car odor and tire peeling are mainly concentrated in individual models. In addition, judging from the proportion of complaints, the proportion of service issues (including comprehensive issues) in 2017 increased compared with 2016, and the number of related complaints also increased significantly. This shows that for medium-sized car consumers, the brand's after-sales service attitude, standardization, and customer care capabilities have become an important assessment standard. 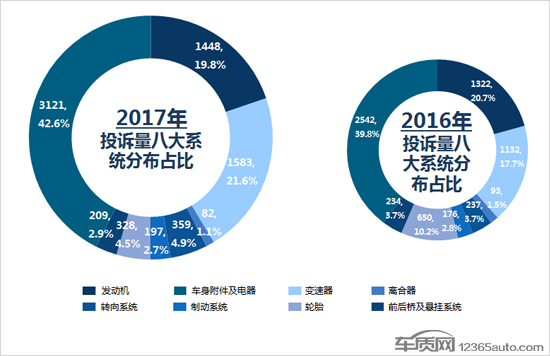 Judging from the proportion of customer complaints in the eight major systems in 2017, the volume of complaints for transmissions increased by 3.9 percentage points from 2016, and the volume of tire complaints has dropped significantly compared to the previous year, which has dropped by about 5.7 percentage points. In addition, the proportion of complaints for body accessories, electrical appliances, and steering systems increased by a wide margin, while the proportions of engine, clutch, brake system, front and rear axle, and suspension systems accounted for a decrease from the previous year.

2. The proportion of joint venture brands decreases year by year 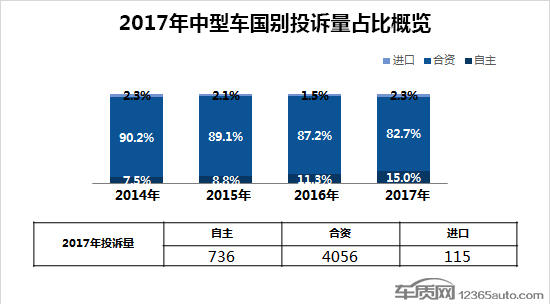 From the typical problems of complaints, it can be seen that the complaints of the joint venture brands mainly focus on various types of faults such as car odor, tire peeling, engine/transmission abnormal noise, setback, and jitter, while complaints about self-owned brand models are mainly Concentration in the car smell, transmission abnormal sound, setbacks and engine jitter and so on. After the above problems appear, it has obvious influence on the daily driving comfort and driving quality of the vehicle, and it can also be seen that the consumers of medium-sized vehicles have a high degree of concern about driving comfort, so the relevant complaints are also mainly Focus on such issues. 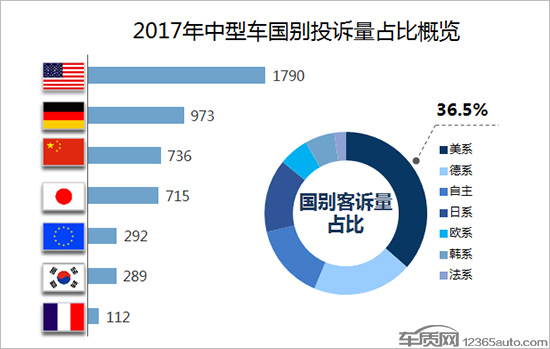 In terms of subdivided into countries, the complaints related to US-based brands were most concentrated in medium-sized vehicles, with 1,790 complaints, but they were lower than in 2016. Among them, the most concentrated complaint models are Mondeo and LaCrosse. The complaints of the two models exceed 200 cases. Typical failures of the two types include odors in the car. In addition, there are also engine dithering problems in Mondeo, and the typical failure of LaCrosse also includes transmissions. Abnormal sound. Although the German brands ranked second, the complaints of the Volkswagen MAGOTAN and the Volkswagen Passat ranked first and third in the rankings respectively, while the typical problems of both were focused on the abnormal sound and setback of the DSG gearbox. On the issue.